Our speaker for the lunch on Friday 27 May, sponsored by Heritage Insurance, needed little introduction. He has taken one of the leading business-related roles in the new States assembly following the recent election. He is President of the newly constituted Economic Development Committee. The IoD is keen to engage with Deputy Ferbrache and both support and lobby in pursuit of Guernsey business development. We're grateful to him for agreeing to speak so soon after his appointment to this key role. 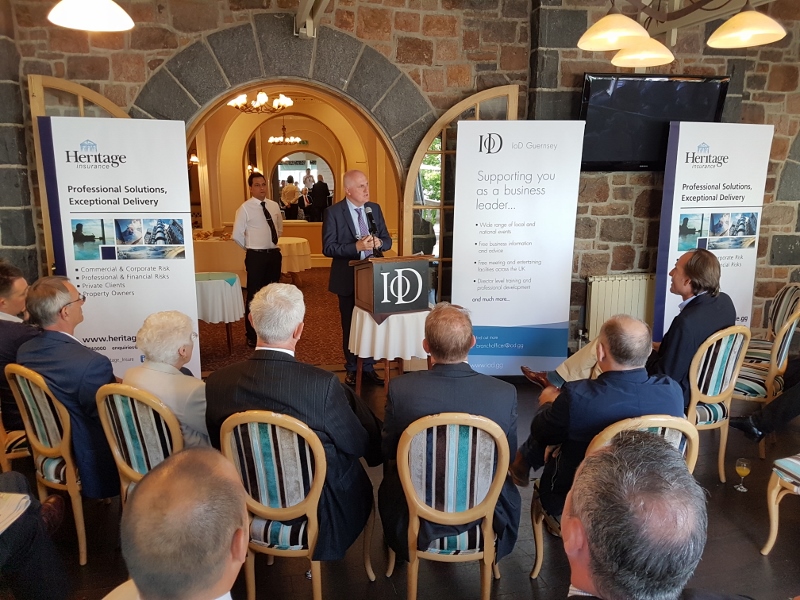 Deputy Ferbrache began his talk by telling the packed audience that this was the job he really wanted.

The most important three key words from the purpose statement for the new Economic Development Committee in his mind are: "To secure prosperity."

He compared the current economic situation with that during his previous term in the States. Then there were "money trees" everywhere. That was a different era and now we need to be confident and portray that confidence to the outside world instead of being negative as we often are now.

He told the members he can be contacted by phone or email but he won't do Facebook or Twitter. He expressed concern at the potential for Brexit as he felt it would mark the end of Protocol 3.

Guernsey is well placed. geographically and in terms of time zone, and we can do business. We need to be able to stand up to the people who are sniping at us. We are a friendly people, with an unblemished integrity and he gets fed up with people and the media talking us down.

He talked about three elements that Economic Development will be responsible for. These were the promotion of all sectors of commerce, the promotion of the Island as a centre for Commerce and Industry and the securing of our Air and Transport routes.

He believes that Guernsey will bloom. He wants it to be a "can do" place.

One of the things he would like to see is the lengthening of the runway. He wants to see a new, flexible, Development Plan, now! He wants to see a strong construction industry. The Open Market he feels is a valuable asset and he detailed some of the great businesses and individuals it has brought to Guernsey.

One of his new roles is on the Board of Guernsey Finance and he believes the talents we have in that sector will see us in good stead. he is worried people have forgotten their roots and need to use their talents. He concluded by saying the new Economic Development Board will have done it's job if people have confidence, once again.

There were a number of questions on a range of topics including White Van man. our relationship with Europe, Population Management, Air transport capacity, the need for Digital development, working with Jersey, the need to Invest money to earn money, sea links, Ministerial Government and making the public aware of the things that we are doing well.