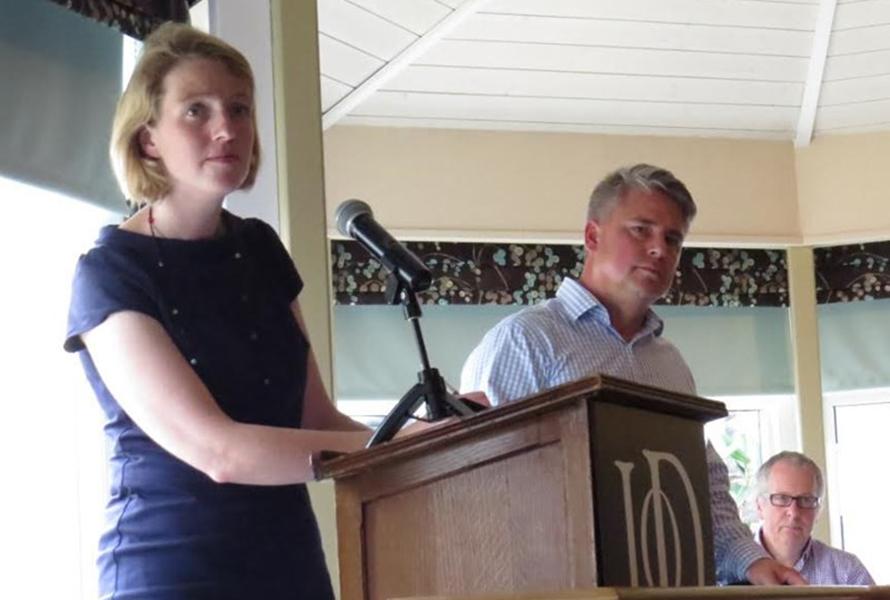 On the 17th July the IoD Guernsey Branch welcomed Gillian Browning, Director of Fiduciary Supervision Policy and Innovations Division, at the Guernsey Financial Services Commission, to the monthly lunch. It had been exactly a year since Gillian had arrived in Guernsey and began her talk by explaining how she had arrived here and some of the thinking behind her decision to move her and her family to the Island. She also explained some of the pros and cons, from her perspective, about living here.

Gillian had worked at the UK regulator since 2007 and before that in the Cabinet Office. Her work with the UK Regulator had been interesting as it was just before the financial crisis. She believes the role of the regulator is to support markets, effectively and efficiently. To do that they have to focus on three key areas; financial stability; guarding against financial crime and preventing consumers from being ripped off.

She explained that in the UK there were 4,000 regulators servicing 26,000 businesses where in Guernsey there are 100 staff supervising 2,000 firms employing some 3,000 staff. Their motto is “Confidence in the Bailiwick”.

Their work involves day to day visits to the licensees. She admitted the resources in Guernsey are limited and that she misses the policy teams and the people they had to provide support in the UK. However the standards she believes are very comparable.

In her role she comes into contact with a diverse range of fiduciary firms. There are 150 licences and turnover and employee numbers in the sector have grown. There is a trend of conslidation with firms joining forces.

The latest UK budget has kept the pressure on tax avoidance and as a result some licensees may have to put some proposals on hold or change their offering. It is important that the regulator doesn't add to the pressure. She has also noted that there are a number of employees who are coming to the end of their careers and so they have become risk averse. She has been getting the impression that the trust companies are not hungry any more, but they should be keeping abreast with opportunities.

A big concern are cyber attacks, she hopes that trust companies are keeping up to date with the latest technologies and keeping up their defences.

One message she wants to ensure comes from this talk is that the Commission is open to innovative approaches and it's staff are available to talk through ideas, even those in the early stages. Innovation was placed in the Fiduciary division and some staff are heavily involved with firms involved in Fintech.

She was clear that we must, as a jurisdiction, innovate. There have been only a handful of proposals considered in the last year but the momentum is building. Commerce and Employment have employed PWC to look at a strategy and there are a number of initiatives under way already including the Digital Greenhouse and a Fintech Hackathon sponsored by a local law firm.

Gillian believes one of our great abilities here in Guernsey is to act as a Petri Dish for new ideas. We can create a supportive environment here and are open to innovation so the question is – is Industry open to innovation?

She then outlined how the GFSC was open to innovation by launching online questionnaires and online PQ's. The GFSC is committed to making it easier for licensees  She concluded that if she was standing here in a years time she would like to see that three things had happened. She would like to see more material innovative businesses, she hopes their licensees can say they have been working in partnership with them and understand their business and she hopes the GFSC's internal investment  in delivering technology continues and pays dividends.