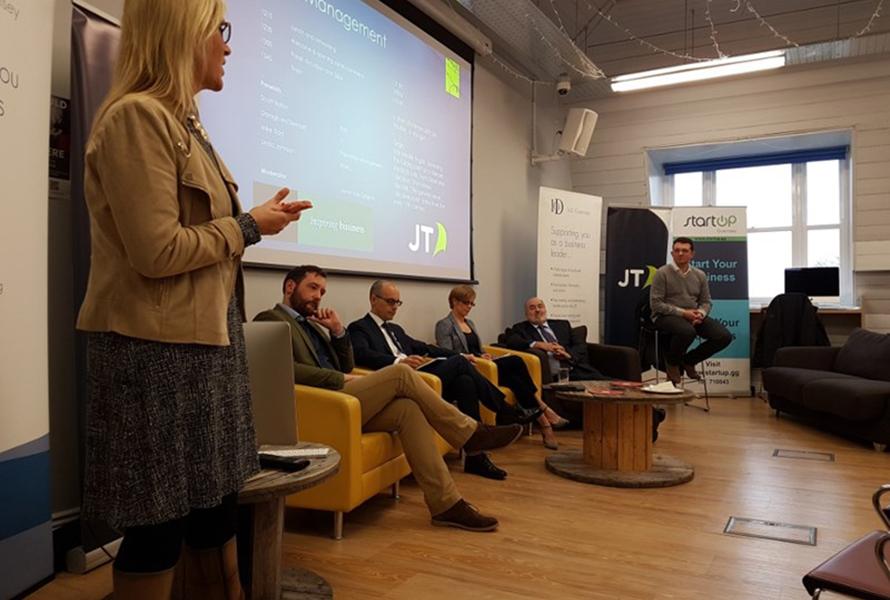 "Crisis Management" was the topic of the second seminar in the IoD winter series sponsored by JT. The seminar explored the process by which businesses in the Channel Islands have successfully dealt with disruptive and unexpected events that threaten to harm the organisation and its stakeholders.

On the 27th January, the IoD welcomed a panel of experts to the second of the Winter Seminar series, sponsored by JT, to discuss Crisis Management. The panel consisted of Scott Bolton from Aon, Daragh McDermott from JT, Mike Tidd from Population Management and Linda Johnson from KPMG. The moderator for the seminar was James Ede-Golightly of the IoD and the speakers were introduced by Tamara O’Brien of JT.

An audience of around 40 people attended the event which provided some fascinating insights into actual events which involved members of the panel. Daragh McDermott talked about how JT had coped last November when all three of their undersea cables to the UK were cut by a ship dragging it’s anchor.

Mike Tidd had been a fleet air arm pilot in the Falklands war and spoke about how they had to cope with 185 Argentinian prisoners of war taken from South Georgia while involved in the Falklands operation and the need to observe the Geneva Convention in difficult circumstances. He also worked at Barings during the Nick Leeson crisis and spoke about how they managed the fall out in the Guernsey office during that critical period.

The main lessons learned concerned the need for rapid action and having a crisis response team set up which knew what to do in the event of a major incident. This team would not necessarily involve the top people in an organization but would be staffed by people who knew what to do in a crisis and who to involve to address specific issues.

The need for open and honest communication from one source was also suggested though of course the level of honesty might depend on the situation that a business faced.

After the crisis there was a great opportunity to assess how it had been dealt with and what the opportunities might be to make changes in the light of the experience brought on by the crisis.

The session was really well attended and the audience asked many relevant questions during the session.