Digital Future Under the Spotlight 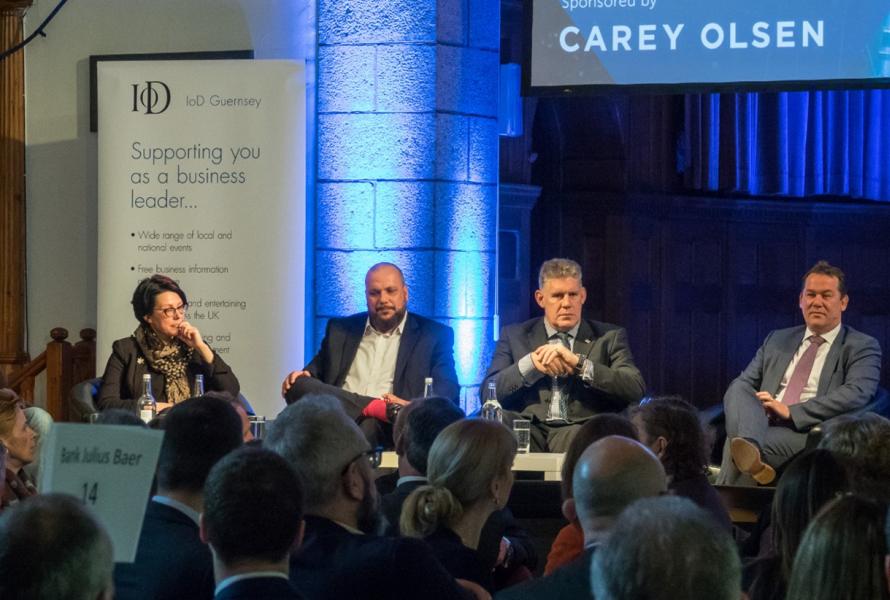 Deputy Andrea Dudley-Owen claimed that Guernsey could be ‘one of the most digitally connected places in the world’ at yesterday’s IoD mid-term breakfast. A new professionally accredited Digital Leadership and Innovation GTA programme, aimed at directors and endorsed by the IoD, was also announced.

During her update on the States of Guernsey’s digital progress, Deputy Dudley-Owen announced that the Digital Greenhouse will host a new Barclays’ Eagle Lab - a tech start-up incubator designed to grow the local digital ecosystem.

She also asserted that Guernsey could be the location of choice for high value, low impact digital business and revealed that fibre to the island’s business areas will come within two years, 100MBps will be available to all island houses within three years and 5G - the next generation mobile tech will be arrive in line with or before the UK.

Digital infrastructure and the security of Guernsey’s connectivity dominated the conversations, with panellists Justin Bellinger and Colin Vaudin keen for the audience to understand that islanders can already choose to access superfast broadband and that perceptions on the island did not reflect the reality that Guernsey is ‘one of the most connected jurisdictions in the world.’

The approach of government setting Universal Service Obligations (USO), such as minimum 100mbps for all homes in three years, came under debate. Phil Male advised business leaders in the audience to be very careful of such numbers which can be misleading.

He reminded the audience that the most important question to ask was not around download speeds but what the island wants to achieve, citing the example of how South Clyde’s regeneration has centred around tailored and targeted governmental support to create an environment which would nurture and attract digital media businesses. He warned that trying to fit policy around the numbers is not a good idea.

Mr Male stated that the technologies are complex and constantly improving and that solutions need to be defined by experts and warned that government needs to be careful not to mandate a particular technology or to intervene too far in a well-functioning market.

5G and a vision of Guernsey's digital future was shared by Mr Bellinger who stated that this connectivity will change society. He said: ‘It will be driving the island’s children to school and connecting the machines in our office and home.’

The panel were all keen to ensure the audience understood the exceptional resilience of the off-island connectivity across all providers.

The Digital Greenhouse’s hackathons, the first digital internships, Digital Seedlings and changes to the school curriculum were cited by Economic Development’s Head of Digital Lucy Witham as examples of the progress her team has made towards improving digital skills.

Directors’ digital skills and visions for their businesses came under the spotlight, with the panel agreeing that while the supportive technology is important, digital leadership skills are critical, particularly amongst non-executive directors.

Linda Johnson, the IoD’s outgoing Chair, thanked Carey Olsen’s Elaine Grey for moderating the discussions. She closed the event by promising that the IoD will liaise with, scrutinise and hold the government to account in respect to the USOs and the Telecoms Sector Statement. She urged the audience to support initiatives such as the Digital Greenhouse and reminded directors that they need to invest in their digital skills and understanding to continue to lead Guernsey’s businesses into the future. Ms Johnson reported that details of the new IoD-endorsed GTA Digital Leadership Programme will be announced shortly.

She said: ‘Imagine Guernsey having the highest level of trained, digitally enabled directors in Europe. This is not a pipe dream; this is a possibility. We already have a great ecosystem – we are a financial centre of excellence with a robust legal and regulatory framework and strong data protection laws, supported by great lawyers and accountants. Couple that with exceptional boardroom digital leadership and Guernsey really can be a world leader.’