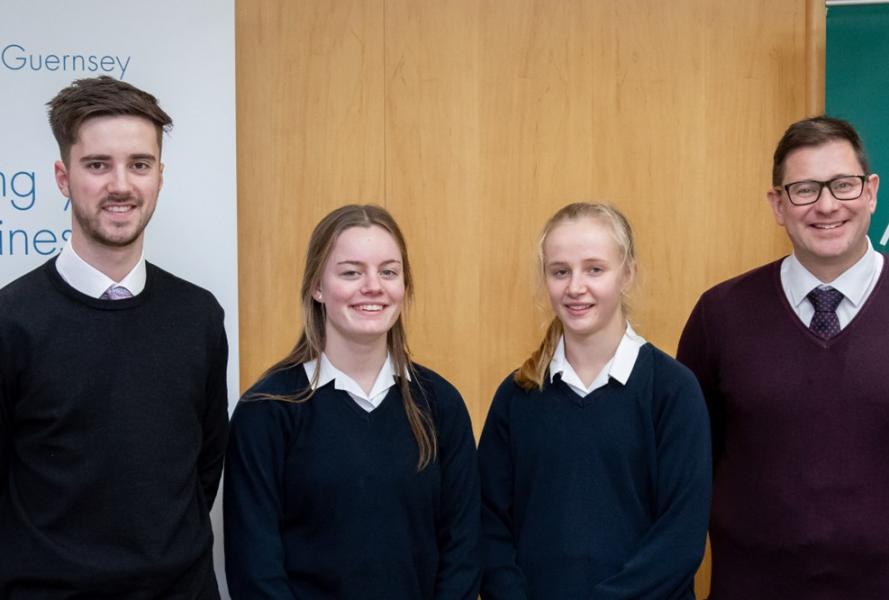 College of FE student Joe Ozanne and The Ladies’ College students Abigail Galpin and Danielle Parr are the 2018/2019 Directors of Tomorrow blog winners.

The three students were selected from a group of ten nominated by their schools to take part in the 2018/2019 IoD Directors of Tomorrow.

The Directors of Tomorrow initiative was created by The Ana Leaf Foundation eight years ago as a way of celebrating young business talent on the island.

The scheme invites students, as selected by their teachers based on their interest in business, economics and current affairs, to attend the annual Guernsey IoD Convention, and afterwards they are invited to submit a blog reflecting on their experience.

The blogs are judged by representatives from The Ana Leaf Foundation, the IoD Guernsey Committee and Orchard PR, and the winning three students will attend the IoD’s first flagship student membership conference in Salford on 27 February, entitled: “Inspiring future leaders”.

IoD Guernsey chair John Clacy said: “It was a great pleasure to have nine of Guernsey’s bright young minds at the convention. Last year the theme was ‘Guernsey’s place in the world and its global reputation’ and each student contributed valid and well-thought through points to the debate.

“The blogs submitted were of a very high standard and it’s clear that the winning students covered unique perspectives on the island and its context within the wider world and that they had been inspired by the discussions of the day.”

Ahead of the IoD Convention the students attended an informal lunch to meet John Clacy and the convention’s moderator, ITN newsreader Alastair Stewart and Simon Anholt who has worked with more than 50 nations devising strategies and policies to help them to engage more productively with the international community. This gave the students an opportunity to discuss the world of business and to voice their opinions about the key issues facing Guernsey’s business leaders and the economy.

Amanda Simmons, a trustee of the Ana Leaf Foundation, said: “It’s inspiring to see these local future leaders were able to get an insight into local business and current affairs.

“The Directors of Tomorrow initiative really gives students the chance to voice their opinions on issues that surround them, both vocally at the IoD event and via their blogs. Guernsey was front and centre of the debate and each student answered a question posed to them by Alastair and their comments really showed how deep their understanding is of not just the island but the complex affairs surrounding its political and financial future.”

The Directors of Tomorrow student’s blogs can be viewed on the Guernsey IoD website here: http://www.iod.gg/directors-of-tomorrow/