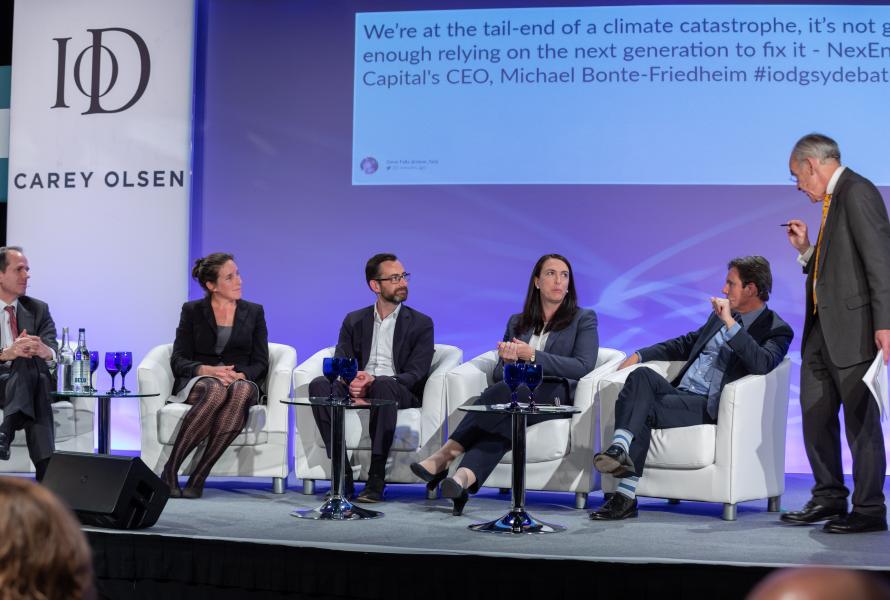 Energy policy options for the Bailiwick in the context of climate ambitions focused on green finance initiatives, an area that fits with Guernsey’s core strength as a centre of financial innovation. The conclusion was that Guernsey has the opportunity to take the lead on innovating green finance products but that credibility will be undermined if the island is not pursuing consistent internal energy policies.

Opening the Convention, Deputy Gavin St Pier said: “Guernsey can choose to step up and lead and this is where the opportunity is, no matter what your views on climate change are.  The upsides of being proactive over climate change are far greater than the downsides.”

He said: “Guernsey has a once-in-a-lifetime opportunity to make an impact in the global capital market and could be the conduit between investors and green investments.”

Kathryn Porter from Watt Logic and Douglas Farquhar from DNV GL were the event’s keynote speakers.

She believes the opportunity for Guernsey lies in developing projects off the island, suggesting a direct electricity cable to France.  She discussed how a new direct interconnector between Guernsey and France would be more efficient, cheaper and provide low-carbon electricity at grid level rather than trying to develop renewable energy on the same scale.

Kathryn said: “The electricity Guernsey buys from France is low carbon, being derived primarily from nuclear and hydro sources. Rather than investing in on-island generation, Guernsey could invest in renewable generation in France, to have a direct economic stake in the electricity it buys.”

He said: “Sustainable finance is not a cop-out -  it improves risk-adjusted returns, impact is more important to today’s investors and regulators are encouraging environmental, social and governance (ESG) credentials.”

Michael Bonte-Freidheim of NextEnergy Capital joined the second panel session, stating: “As business decision makers, we cannot rely on policy to solve the issue to find a solution for us to then follow. The reality is that it is up to decision makers in business to act.”

John Clacy, IoD Guernsey Chair, said: “I truly believe Guernsey can have a meaningful impact on climate change globally.  The event’s speakers have provided a lot of inspiration for future policy. With the States of Guernsey announcing their intention to publish an energy policy this political term I would urge them to be big and bold and rise to the challenges that have been set at this Convention.”

Deputy Gavin St Pier left the audience with a few thought-provoking comments; he said: “To be taken seriously, the island domestically has to ‘walk the walk as well as ‘talk the talk’.  Are we ready to make the decisions that other places have made? To ban certain types of fuel, or new internal combustion engines. Do we want to structure and use a mileage charge – to be piloted as a replacement for fuel duty – as a tool to encourage or discourage particular vehicles or uses?”

The 2019 Convention was sponsored by Carey Olsen as lead sponsor with HSBC, Ravenscroft, Intertrust, Source, Deloitte, C5 Alliance and the Ana Leaf Foundation as supporting sponsors.

The October IoD Breakfast will build on this theme, welcoming Marc Laine of Environmental and Social Impact Monitor and Justin Sykes of Innovest Advisory.  You can find out more here

You can read more on Kathryn Porter’s thoughts here.