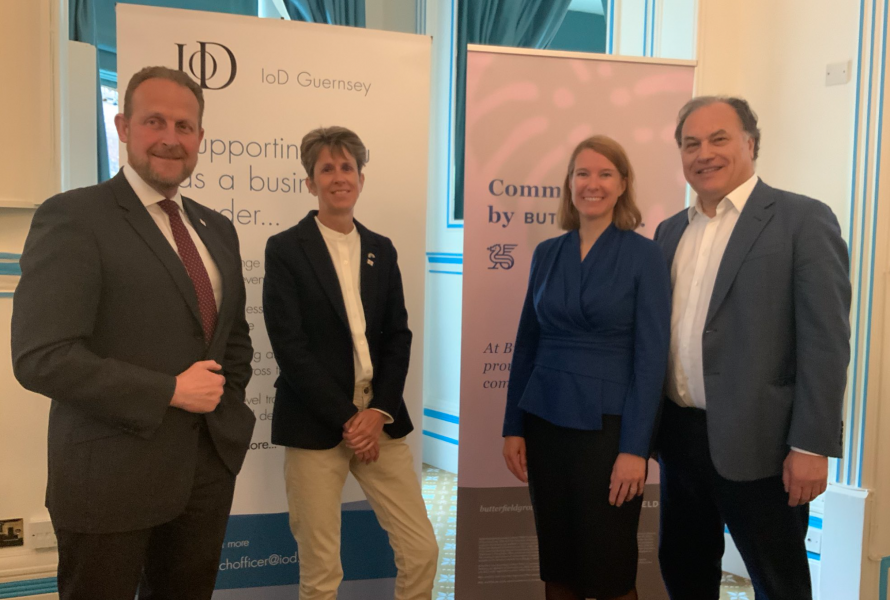 The IoD’s May seminar, sponsored by Butterfield, built on the key themes from the IoD’s Mid-Term Debate, and explored what changes in governance and leadership in the private sector can also be applied to the public sector.

The Mid-Term Debate focused on how leaders - from top FTSE-listed firms to local businesses - needed to adjust their thinking and approach during and after the Covid-19 pandemic.

The event opened with the panel discussing how swift decisions were made during the pandemic, despite rapidly changing data sets and information.

Paul Whitfield discussed how the digital partnership with Agilisys gave the States the ability to be much more transformative and more quickly responsive to needs. This had been significantly enabling in our response to COVID. Many of the technical platforms were created at pace and speed with the support of our digital partner, such as; Track and Trace, Community Vaccination Centre, Travel Tracker.

Planning was key and Deputy Soulsby explained how, weeks before the pandemic was on the horizon, the States had carried out a full-scale pandemic training exercise to test all the procedures and work through practices ahead of it actually happening. She said this planning and preparation became invaluable when it came to responding to Covid-19 as well as reacting promptly and making some tough decisions such as imposing the island’s first lockdown.

John Hollis touched on trust and communication and how the speed, focus and consistency of communication came together so well to support the States’ response.

During the pandemic decisions were made by the CCA - consisting of Presidents of four Committees of the States and was very effective in making decisions quickly as it had the power and was able to cut through the bureaucracy of the Committee system. However, it is true to say that we actually had a hybrid system, with the Committee for Health & Social Care having been delegated the responsibility for managing lockdown and preparing a framework to exit from it last year. In addition, there were daily briefings with the Policy & Resources President, herself, the CEO and Head of People Policy that were effective in dealing with operational issues on a timely basis and enabling CCA to concentrate on strategic issues.

In some ways it was easier to operate faster during the pandemic as it was understood across the organisation that it was a clear and present danger and the highest priority. That was not the case in normal times when there were competing priorities. That has lead to a lot of work being attempted all over the place and what the Government Work Plan is partly seeking to address.

She explained how the Committee system could be cumbersome, especially where there is a need for multi-Committee involvement. It was not a system conducive to fast decision making. . Deputy Soulsby said she had come back around to the view that some form of executive government would be beneficial.

Paul Whitfield noted this was necessarily a political decision, however made point that the more streamlined and expeditious decision making made available through the CCA enabled the public sector to deliver at pace and  empowered to do so. In non-crisis mode he stated as  as CEO he was effectively working with the sector in reality, across a board of 38 members  This ultimately impacted upon the speed of both decision making and therefore delivery.

People was a key theme of the recent IoD Mid-Term Debate. Paul Whitfield said public service is typically hierarchical, and he is striving for a flatter structure. Access to human capital in the future is a concern, and gaining access to people with the right skills. He believed there was need for a gear change, with the ability to use cross-government talent and empower people.

Deputy Soulsby agreed and said we don’t talk enough about people, ensuring that we have the right people in the right places and that they feel part of a team.

The panel then discussed which single facet of government they would change if they could. Paul Whitfield said working with a smaller government could be more effective, and could deliver a very clear, strategic direction.

John Hollis discussing STSB said he would incorporate the entities which are not operated as a business already. He said he didn’t mean ‘selling the family silver’ but keeping the focus on serving the island. He commented that without a Board close to the business you limit what it can do.

A topical issue at the time of the event was the new Eastern Seaboard proposals, a project of which John Hollis has been close to through STSB. He said that while the price tag for the project was significant, we had to look at the current harbour repairs needed, and what would need to be done to change regulations, and added that the cost didn’t seem too onerous. He said that the project looked at a sustainable future for the harbour, and that support and investment in the project would demonstrate that Guernsey is ready to build back better.

The discussion moved back to the public sector and reducing it. Concluding, Deputy Soulsby said that it is not about the numbers but about having the right people in the right place, and that when we put people in place, that they are adding value. We are then putting the money where we will get the best value and return.

The next IoD Breakfast is a webinar on Friday 11 June and you can find out more here.