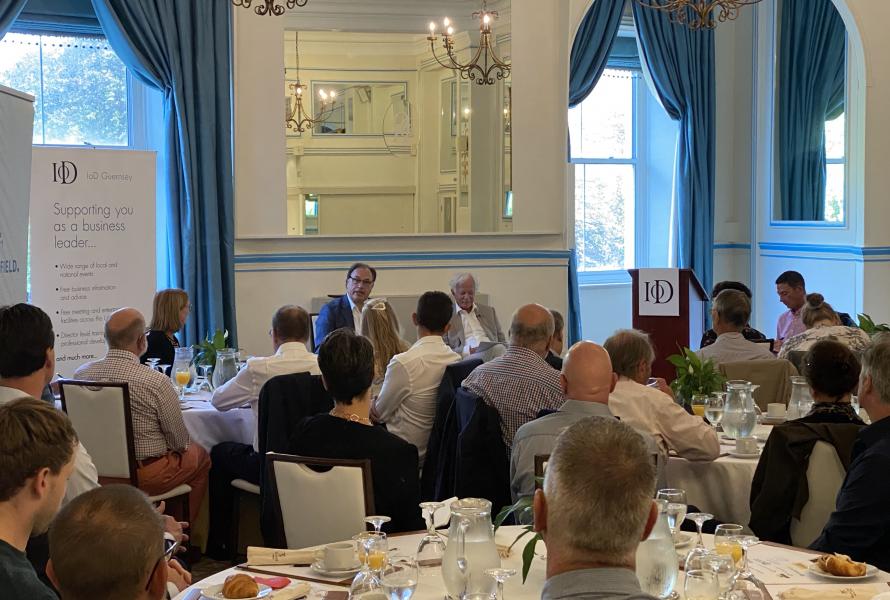 The IoD’s September seminar, sponsored by Butterfield, discussed ‘In the Era of Recovery, How Can Government Learn from the Commercial World?’ It included the role and vision of the States Trading Supervisory Board (STSB) and its relevance to investment in island infrastructure from a business person’s perspective.

Stuart Falla, MBE and John Hollis sit on the STSB; both experienced businessmen, they  joined the Board in 2017.

John Hollis  opened the breakfast by explaining that the STSB was born out of a desire from the States to have a more active shareholder role in their operating companies and to provide better value to the public. The 2016 reorganisation of government created the STSB and the Board consists of three politicians and two business advisors.

He said more of the STSB’s businesses are either undergoing transformations or attempting to correct past under-investment and, whilst it has been hard work, the Board is in a better place than it was four years ago, although John estimates that they are only about 50% of the way to where he would like the businesses to be in the future. Quasi-boards had been established for all unincorporated businesses to emulate others (such as Post and Electricity). Quasi-board members have been added from the commercial sector and other incorporated businesses and these help to challenge management to adopt stronger strategic planning, investment appraisals, overall efficiencies and customer service.

He commented that some of the STSB’s progress is still very reliant on other States departments setting policy, and it can be a waiting game for the pieces in the jigsaw to come together. Likewise, in terms of operating practices the STSB is bound by some of those already in place in the civil service, such as headcount, pay and conditions, restrictions around recruitment and transferring people and roles.

Both agreed on one key theme throughout the breakfast: the States did not lack the funding sources to  make things happen, they simply lacked the ambition, and their comments echoed the recent Scrutiny Report into a lack of infrastructure projects on the island.

With the previous comment in mind, John and Stuart agreed the companies should definitely not be sold off and should remain in States hands. The only reason both could see for selling would be to generate cash and, as agreed, there is no shortage of it in the States.

Stuart Falla commented that there had been a fear of spending money which had led to most States property on the island not being refurbished, and the States trading bodies lacking capital infrastructure investment.

He said that, given the opportunity, he would incorporate all the existing unincorporated businesses such as Guernsey Water, the Ports, Guernsey Waste and the Dairy. This would enable them to run as full trading businesses responsible to their Board, but of course remaining in line with States market policies or laws as required.

You can find out about future events here.