The island’s economy continues to be damaged by under-performing air links, say Guernsey Chamber and the IoD. In a joint statement they say this is demonstrated by the recently reported decline in passenger numbers which do not reflect trends seen elsewhere.

‘Guernsey air traffic has consistently underperformed the UK and other Crown dependencies since 2010. Air traffic is now lower than at any time since 2008, while in Jersey, the Isle of Man and the UK, air traffic figures are higher than at any time since 2008. It seems unlikely that the Guernsey downturn is the result of cyclical factors given the substantial difference between our figures and those in the other jurisdictions with similar economies,’ says the joint statement. They point out that under performance has been especially evident since 2014, with Guernsey posting recurrent declines in traffic while other markets have recorded consistent growth. 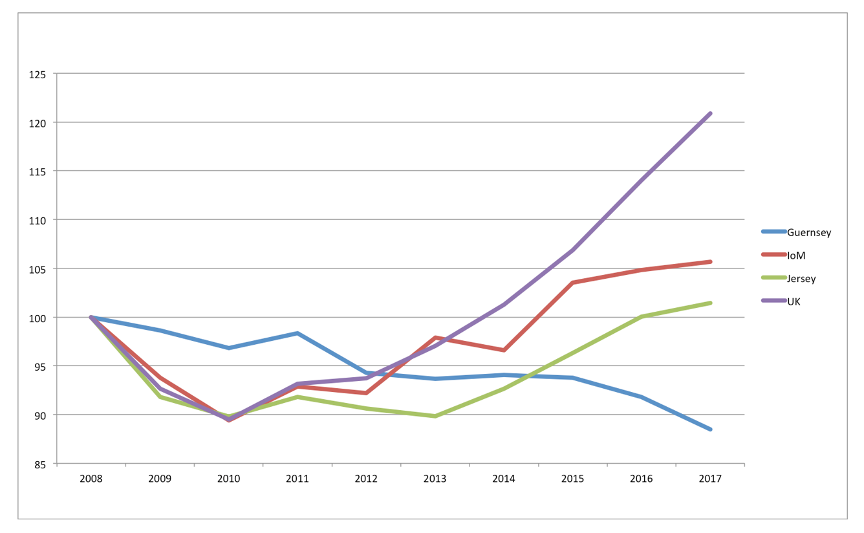 Figures from the Civil Aviation Authority

‘While it is widely recognised from surveys and petitions that the high cost of air travel to Guernsey has inhibited travel by business, tourists, islanders and their friends/family, there has been a presumption by policy makers that high fares do not impact the amount people travel.

On the contrary, these long term air traffic figures show the damage that has been caused to the island’s air links by its failure to prioritise competitive fares and/or invest in the infrastructure to allow competitive operators to provide services from Guernsey.’

The business groups say that the figures released last week demonstrate real damage to economic activity resulting from a lack of competitive fares. ‘It also confirms that the existing strategy is neither acting as an economic enabler nor providing a sustainable service for the island. In order to maintain the island’s air links for the long term we first need to stop the decline in air traffic, which can only be achieved through competitive fares and investment in infrastructure. Competitive fares require infrastructure that allows for efficiencies of scale, public subsidies or both. Presently, the island appears to have neither.'

The organisations welcome the gesture to freeze increases in landing charges but say this is unlikely to rectify the serious issue of falling numbers.

Nearly 500 survey respondents made clear recently in a joint questionnaire from both business groups that they believe competitively priced fares are the highest priority to address. The view that fare prices are the major factor behind the decline was also made clear in a Facebook survey in which some 7,000 respondents called for lower-priced fares.

‘Whilst freezing landing charges may make some difference in the long term, it vastly underestimates the need for investment in the air and sea infrastructure for Guernsey,’ said Chamber President Barrie Baxter. John Clacy, IoD Chairman said: ‘In the face of the continued decline in air passenger numbers it is clear that action and investment is needed. We strongly urge the States to identify air and sea infrastructure options to allow for a full and reasoned perspective on what the investment opportunities are.’

The business groups, who collectively employ more than half the island’s workforce, say ‘The current air transport strategy is just not working.’ They believe that the political approach to air links in recent years - which appears to have focussed on minimising the direct cost to the States, rather than on delivering to the social and economic needs of the island as a whole, has led to major under-investment in this area.

‘We need urgent action to address this decline in passenger numbers,’ they conclude.